Shrine Empire is showcasing 'It Was Never Concrete', a solo exhibition of Ayesha Singh, curated by Anushka Rajendran from 22nd August to 22nd September 2019 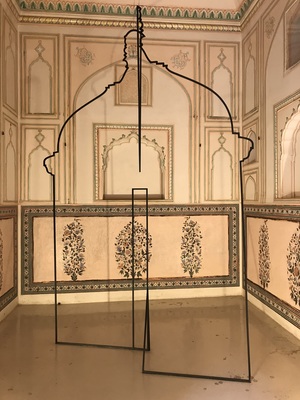 Ayesha Singh, Hybrid Drawings and (Warp), Wrought iron. Image Courtsey - Shrine Empire
The exhibition, ‘It was never concrete’ presents new works by Delhi based artist Ayesha Singh in response to the city of Delhi, where the artist currently lives and works. The series of works on view explore how the specific social, political and historical context of the city manifests in its architecture. Singh’s works reveal the power structures embedded in the cityscape, and the aspirations and destiny that they embody.
Curator Anushka Rajendran tells ““The shape-shifting force of history assembles and reassembles itself. And built architecture is perhaps an ostensible symptom of its ebb and flow, aggression and benevolence, knowledge and folly. In Delhi, an ancient city that has seen the rise and fall of empires, regimes that ran on megalomania and machismo have been malleable to similar narratives that have replaced it.” 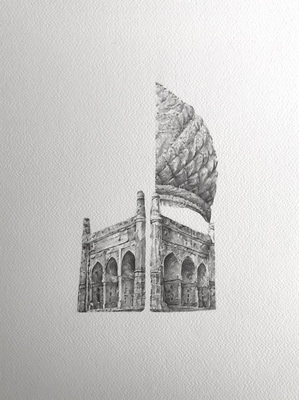 Ayesha Singh, Hybrid Amalgamations, Graphite and pencil on paper, 58.4 x 40.6 cm, Unique, 2019. Image Courtsey - Shrine Empire
She further adds, “In ‘It was Never Concrete’, the city’s architecture emerges as a metaphor to critique lofty desires for enduring power and privilege. Singh reminds us that reinforced concrete is far from ‘concrete’, vulnerable to time. Just as the promise of late capitalism, and hype economies that rely on cyber infrastructure with its algorithmic contingency mimicking the logic of material imprints of power. While pirated architecture attempts to hijack the visible and invisible ordering of another’s power, we appropriate towards similar ends — often without form or function — for our homes, public infrastructure, social media accounts and advertising imagery, unconsciously informed perhaps only by the hegemonic ideologies past and present. Everything shall become fragments that integrate into our present. Time is an agent that allows both permanence and impermanence in Singh’s collapse of history and contemporary into one moment. It is our ally, and our conscience.” 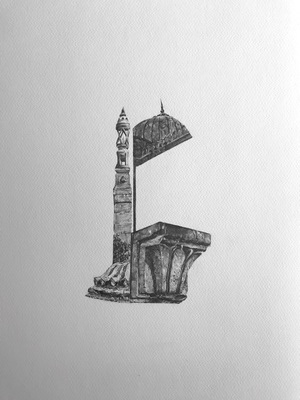 Ayesha Singh, Hybrid Amalgamations, Graphite and pencil on paper, 58.4 x 40.6 cm, Unique, 2019, Image Courtsey - Shrine Empire
About the artist :
Ayesha Singh completed her MFA in Sculpture at the School of the Art Institute of Chicago (2018) and BFA from the Slade School of Fine Art (2013. She also holds a Fine Art Diploma from Chelsea College of Art and Design, University of the Arts London, UK (2010). She has exhibited solo shows in various galleries of Mumbai and Delhi along with showcasing at various international group shows.
Her works explore the fragility of “ornaments of authority”, their transience, impermanence and inevitable shifts in the meanings that our built heritage embody.
The show is on view at Shrine Empire, New Delhi from 22nd August-22nd September