Tracing the patterns of history in something as tangible as architecture can be daunting and exhilarating, as is evident in this comprehensive study of ‘The Governor’s Residence in Tranquebar: The House and the Daily Life of Its People, 1770–1845’ edited by Esther Fihl.

The restoration of a house means moving backwards in history; not to one special date or year, but something that is a lot like storytelling. For me, restoration is a form of storytelling; the task of assembling a building’s story. This discourse on restoration served as our point of reference from the outset. The combination of archival information and the information visible in the layers of constructions and changes revealed many histories about the building which, as in storytelling, are made up of a major story interlaced with minor ones.

In fact, the guidelines issued by the project’s steering committee for INTACH can be summarised as follows: to restore what remained without removing parts of the overall story in the building. The key focus of this assignment was to maintain the full life story of the building. Not just the period when it served as the governor’s residence, but also – to the extent that this was possible – a time before that as well as afterwards, in the period following the British takeover and after Indian independence. 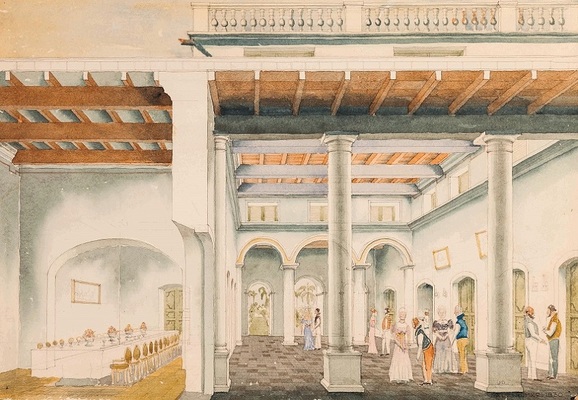 Image 1: Guests arriving in the grand hall of the governor’s residence where the table is set for dinner, c. 1835. The painting is aquarelle on paper, by Jens Damborg, 1985 (private collection). From the National Museum Collection, Denmark. Photograph Credit: Jens Damborg. Image Courtesy of the artist and Esther Fihl. http://press.uchicago.edu/ucp/books/book/distributed/G/bo26482730.html.

When we looked at the cultural encounters taking place in and around the house from the 1770–1845, they seemed to reflect processes of making something opposite. Both Indians and Europeans used each other as a kind of mirror reflecting cultural otherness in relation to their own cultural self-identification. They encountered reversed social rules and agendas, and in a cultural sense they grappled with each other and created new shared social terrains that were neither Indian nor European, but something creative and new in itself (though they were not free from power relations). And this extended to the arts, as well. In this exchange between Indians and Europeans, the experimenters and subjects reversed rules that led to cultural inventiveness and hybrid styles. This accounts for the hundreds of naturalistic ‘company paintings’ brought back by Danish civil servants serving for years in Tranquebar. The presence of both European and Indian artists trained in European techniques, which made the growth of new forms of portraiture possible, especially in the late 18th century developed at the royal court of Thanjavur. Several of these miniature paintings ended up in Danish museums along with large collections of other material items brought from Tranquebar. In the museums, these objects, till today, serve as tools to reflect and disseminate the history of the life and ideas of people in and around Tranquebar.

Esther Fihl is the editor of the book ‘The Governor’s Residence in Tranquebar: The House and the Daily Life of Its People, 1770–1845’.