Another Banana Day For The Dream-Fish

A review of Another Banana Day for the Dream-Fish – an exhibition conceived with the Japanese curator Kodama Kanazawa and co-organized with the Japan Foundation as part of Japonism 2018 that was on view until September 9, 2018 at the Palais de Tokyo in Paris.

By nature, we humans are a curious species. In all of us lurks an Alice, itching to go through the looking glass to discover the topsy-turvy world waiting on the other side. It was perhaps easier when we were children – our sense of wonder and our capacity to invent new worlds probably knew no boundaries. But how were they constructed? What factors determined our fantasies, our dreams, our games and our childhood fears and anxieties? What kind of hold do they still have on us as adults? Palais de Tokyo seeks to answer these questions with Another Banana Day for the Dream-Fish – a unique exhibition that dives deep into our childhood memories to examine how they influence the construction of our identities and their representations. With a title that alludes to a story by J.D. Salinger – about a man who realises that he is too grown up and that there is no way back – Another Banana Day... forces its visitors to travel from everyday, intimate territories to fantasy worlds, through a series of fragments of an identity in permanent construction. Addressed at once to children and adults, the exhibition invites visitors, ‘from 7 to 77’ to cross through a variety of trials, while confronting themselves with the strange and the stranger. 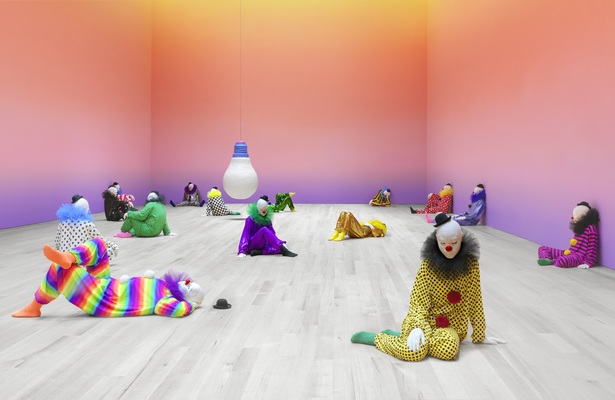 It brings together creations by around 30 artists and craftspersons, based on childhood imagination. Constructed like a tale, with many levels of interpretation, the exhibition has a dramaturgy composed by the artist and film-maker Clément Cogitore and conceived along with Japanese curator Kodama Kanazawa. ‘The point is not so much to consider childhood as a theme, a research subject or a world unto itself but rather to offer a journey and a deconstruction of the archetypes generally associated with childhood imaginaries, as well as its foundational myths, their contemporary transformations, stereotypes and the conventions that mould them, so as to evoke the modern world and the dominant depictions of adult society,’ explained Sandra Adam-Couralet and Yoann Gourmel, the curators of the exhibition.

Far from being a watered-down vision of childhood, the pieces in the exhibition explore at once fantasy, ingenuity, a feeling for play, apprenticeship and the marvellous, but also the dark and sometimes cruel or perverse side of childhood, ranging from feelings of abandon and boredom, to the capacity for terror, anger and fear that can sometimes drive it. Even the aptitude for amazement, which is so often associated with childhood, is tinged with echoes of various realities, depending on our origins and life journeys. As Cogitore put it, ‘Here an enigma will be raised, the physical world will be put out of joint – and sometimes become haunted – monsters will be confronted, the disappeared will be mourned, and, as for all characters who have been through trials, the spectators will emerge transformed as well as, I hope, their perceptions and imagination’.

Short Shorts: Happiness Is A Seat Between Two Wheels With Spokes