Blurb: Short Shorts is Arts Illustrated’s micro-fiction series that borrows from the thousand words through which a picture speaks to create a moment of experiential art. Featured here, from our issue on Time & Art, is one such piece based on a selection of artworks from the first Yinchuan Biennale 2016 in China curated by Bose Krishnamachari. 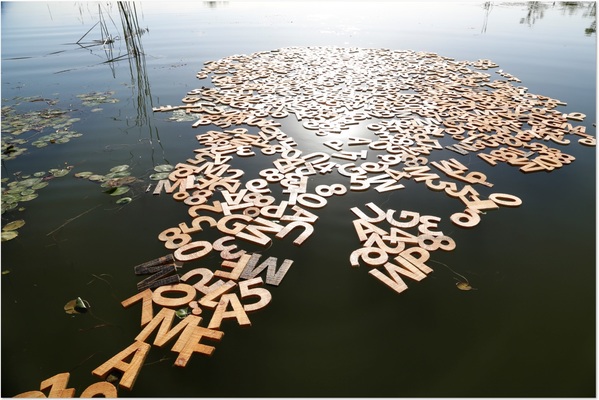 Alphy was a simple man. Just that his mind was laid out like a board of scrabble from which he would pick up tiles of letters to create his crosswords. You would find him on the sidewalk outside the restaurant by the lake where he had his cup of tea every morning with a notepad and pen, scribbling away. And every now and then he would raise his head and look sideways after a few minutes of plodding and pondering and sport a smile of great satisfaction. Only a few who knew his real name (Alphonse) understood that he was actually engaging in a duel with that warm, nimble, generous yet invariably cunning mind. And he was loved. By his fans. His skill did not lie in generating a grid of alphabet soup, but in creating clues that were just about cryptic to baffle the puzzler. They were constructed with such honesty and precision that they were teasingly enough for an intelligent person to be able to solve by merely following the conventions. His editor once remarked that his puzzle would make you stare at it in resignation before that joyous moment when you crack one and the rest would all fall into place. Like his crosswords, he led a life that veered between the defeating and the delightful. He was divorced twice and was an alcoholic. His clues were dazzling. Take this for example: ‘Poetical scene with surprisingly chaste Lord Archer vegetating (3,3,8,12)’, the answer to which gives THE OLD VICARAGE GRANTCHESTER, Jeffrey Archer’s home. String from the thound of Muthic (5) – THONG; A forbidding place (7,4) – AUCTION ROOM; or even Moving from H to O? (5) – WATER. He also invented incredibly complicated puzzles. However, Alphy’s life was pretty much ordinary. Except on the day he died. The kindred folks of the small town were baffled by the sight of letters floating in the lake along with lotus leaves, weeds and the drooping reeds. Nobody could solve that puzzle.

Manoj Nair is a writer, critic, curator and author of Pencil Sketches: a volume of writing on Indian visual arts, cinema, literature and music.

What is it That You Want?​