Re-imagining architecture’s potential in anticipation and unpredictability, and the possibilities that come with it to view that seminal search for paradise as reality and architecture as fiction

The reach of architecture is embedded as much in daily crisis as in the uplifting of the human spirit. If a building’s prime concern is not just to accommodate but to make life better, then architecture’s basis is rooted in perennial optimism. Every new idea, every new brick planted on a building site is a signal of hope; the future is always meant to be better. When architects and engineers lose faith in their work, and buildings become a matter of production and assembly-line, there is real cause for worry. 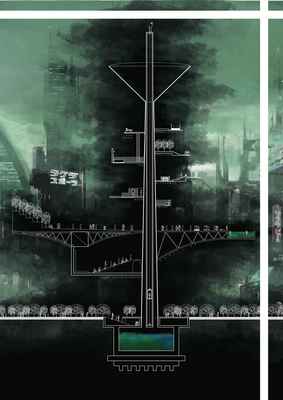 Tree House is a starburst of domestic functions in the sky. A set of services at ground level rises into public space, and further up into areas of greater privacy – bed, study, bath . . .

Outside Patna, a road bridge across the Ganga, is a two-dimensional slab of concrete connecting the two sides of the river. Raised on repeating pile foundations, no attempt was made to distinguish the bridge portions that occur on land from those on water. No variations in material, structure or altitude were worked into the scheme to suggest that a river crossing was being made. Nor any design concessions made to the flat plains landscape. A workable idea was available; a blueprint was pulled out of a used bridge design drawer and was mindlessly repeated across the wide arc of the river; just as it is over other rivers, every culvert and ravine throughout India. A four-year-old child, uninitiated in engineering, would have drawn the same bridge in art class – a crayon line of yawning simplicity, childlike, without imagination or invention.

That the ordinary and the mediocre form the centre piece of the country’s architectural endeavors is nothing new. Still, when I saw the bridge, it was hard not to be appalled by the scale of the desecration. A once beautiful countryside, its open agrarian fields and a monumental shimmering waterway had been condemned by an altogether banal manmade construction. Yet, for most residents, strolling about the bridge sidewalks in the summer evening, the structure was a source of infinite pride. People preferred to err on the side of caution; the possibility of unknown consequences was a condition avoidable at all costs. The mere ability to span a river was achievement enough. Worship of conformity – read as a fear of the big leap – protected them from the potential confrontation with incompleteness, incompetence and failure.
Where then does it leave the architect?

Infinity House modulates design like an accordion – a continual expansion that occurs with expanding requirements. Courtyard to living to dining to bedroom to bath, rooms close into each other folding into a concise package.

In a situation of over population, and a future that the enlarging number puts in uncertainty, architecture’s potential has to be judged in anticipation and unpredictability. Certainly, a construction that displays banality is often one that quickly solves a problem, but it can also be one of mesmerising force and artistic resolve, an outcome informed by testing and uncertainty. Surely when the present is riddled with problems, without resolution in sight, the great infinity of possibilities is an open universe – the future, a piece of fiction, a hope that should allow the architect and the planner to construct altogether new, more lyrical stories. We do, because we have never done before, becomes a valid argument.

The ethic of the changed, altered, eccentric, exaggerated, even depraved and debased view of architecture is the only serious hope of its future evolution. Without reversing, defying and deriding all the forces that make architecture possible, nothing can happen. If the city is a social construction, how then do we un-divide the city, un-gate the community, un-wall the house, and make homes and neighborhoods without borders? Is it possible to take the ideal a step further to actually share the city, the apartment, and the house with others outside the family? If mixed use is a desirable phenomena, can it allow for a complete dissolution of architectural identity – where homes, shops, offices and clubs aggregate in a single space, where bridges become shopping malls, urban monuments social centres? Could the cultural life of a city be lodged in a single structure? Could skyscrapers accommodate the poor and increasing slum population? Or could an underground building, a mudscraper – be a vision for a future city? Breaks with the long established codes of building – high and low, public and private, community and control, dense and sparse, technology and tradition – the truth of such simultaneous, if contradictory, architectural actions will not just reveal new ideals but present justification in how we live, where and why? To make that possibility real, the architect builds as witness and participant, and not a creator, and with a concrete realisation of risk as the charged central brief of design.

Today, architecture can only be read as a significant record of our loss of greatness, a reflection perhaps even of cultural stagnation and decline. If so, then of utmost importance is to stretch urban routines outside the zone of tedium and dead habit – into something not just livable, but conspicuous and wondrous. In a society stubbornly fixated on conventions, to make the alternative – if not possible – at least, visible and within reach. It is what a magician describes as ‘creative imbalance’, working on the edge of getting your secret discovered, the hope that a skeptical audience pins on the failure of an impossible act. When it fails, it is serious tragedy – and comedy. When it succeeds, it crosses an unknown frontier.
At the end of the road, at the beginning and end of every seminar, every project, every conception and enquiry, lies that seminal search for paradise. Not Utopia or that perfect place, but a physical resolution nonetheless, that allows life to be lived with meaning and grace. Paradise is invariably the final question asked of every building unveiled at a new site. Paradise leaves us clinging to new hope. Paradise is the only reason for building. If there was a Garden of Eden, if the Mughals made the physical representations of paradise for themselves, what then is the paradise of our time, what is the paradise of the future?

Read More: New Artworks To Checkout On Mojarto This Week!