India’s stepwells, a rare mix of functionality and aesthetic, has in its mix an old reverence for visual extravagance steeped, quite innocuously, into everyday life. Edited excerpts from the article.

A black-and-white photograph taken in 1971 by Raghu Rai, one of India’s most famous photographers, captures the moment when a young boy dives from the crumbling masonry of the Agrasen-ki-Baoli in Delhi into the dark waters of the stepwell. Beyond rise the modern tower blocks of the city. It is an image of contrasts, ancient and modern, shadow and light, and one that disorientates the viewer in another way. To take it, the photographer must have descended the steps into the man-made chasm to stand at the water’s edge, lifting his camera up to ground level. As Rai would have discovered, stepwells are barely visible above ground and their function and aesthetic can only be appreciated on entering them. 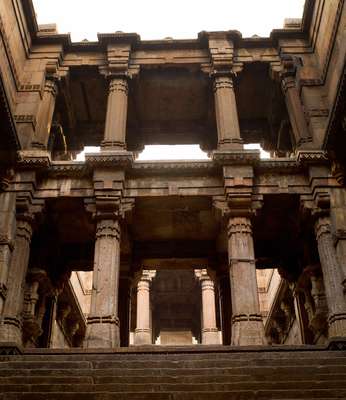 There is a long inscription on the 16th-century Dada Harir Stepwell, part of which reads:

“… In the Gurjara country, in the glorious city of Ahmedabad […] Bai Sri Harir caused a well to be built in order to please God, in Harirpur, situated to the north-east of the glorious city, for the use of the eighty-four lakhs of the various living beings, men, beasts, birds, trees, etc. who may have come from the four quarters, and are tormented with thirst … As long as the moon and the sun [endure], may [the water of] this sweet well be drunk by men! … [The lady] Bai Sri Harir by name built this well at great expense, in order to benefit the world.”

This extract reflects the different motivations – religious, practical and public-minded – that inspired benefactors, a significant number of whom were women, to commission stepwells. Described as India’s forgotten architecture, thousands of these magnificent water buildings were built across India from medieval times onwards but they are particularly associated with the arid, north-western states of Gujarat and Rajasthan, where there is a profound shortage of fresh water and the seasonal monsoon rains quickly disappear into the ground. Sunk into the earth to the level of the water table, stepwells transformed into huge cisterns during the rainy season, and were designed to give access to the receding water levels during the rest of the year. 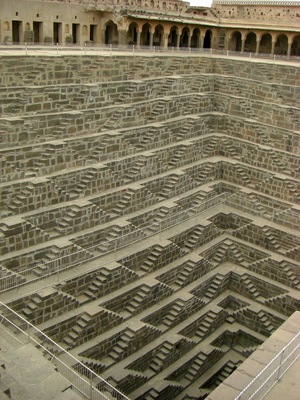 Rudimentary stepwells have been constructed since the 3rd millennium BCE and evolved from basic pits in sandy soil to elaborate and complicated multi-storey structures dug deep into the ground. The earliest existing stepwell may be the Jhilani Stepwell, which appeared in Gujarat’s Saurashtra region around 550 CE. It was built of stone blocks that were laid without mortar, an innovation in stone construction that made stepwells possible. Over time, three major elements came to define the stepwell: water fed into it through cylindrical well shafts sunk through the rock, from which water could be drawn in buckets; a stepped corridor or staircase that led down several storeys into the vast excavated and stone-lined trench, ending at the water level of the well; and subterranean passageways and ornately carved open chambers and galleries that offered cool retreats.
Suzanne McNeill is an independent writer and graphic designer based in Scotland.