Blurb: For most of us, Kali appears to be a negative force, but the origin stories of a cosmic battle point to the dual nature of her aspect, which is embodied in the seemingly opposite meanings of her iconography. Edited excerpts from the article. 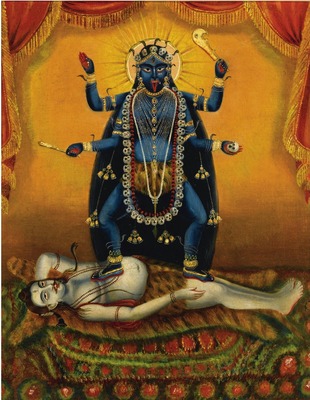 Generations of artists have found awesome beauty in the figure of Kali and the images and symbols associated with her. She became a popular subject for artists in 19th century Bengal, where, long before Raja Ravi Varma, the early Bengal school of artists had started to experiment with oil as a medium, painting familiar subjects from mythology in a distinct indigenous style. They took the references for their iconography from the sculptural traditions of the goddess that already existed in terracotta and stone and reinterpreted them with an emphasis on the anatomical representation that appeared real.

These were dramatic visualisations that represented the goddess in a full blood-thirsty and ghoulish style. To the Europeans who commissioned these paintings, Kali must have appeared as an icon of destructive and uninhibited madness, displaying a terrifying insanity. Where traditional images of deities such as Parvati and Saraswati acquired a soft and gentle demeanour that conveyed their benevolent aspects, Kali was depicted rampaging across the canvas, wild and frenzied, and these paintings helped establish the iconography of the goddess that is familiar today. Her name is the feminine form of the Sanskrit word kal meaning ‘black’, the darkness of the void, and her place of abode is said to be the cremation grounds. So her body is always black or indigo and garlanded with a necklace of skulls. Her tongue lolls bloodily from her mouth and her four arms hold aloft her attributes including a sword and a severed head, sometimes still dripping blood. She dances in anger, in abandon, and Shiva (Shiva!) lies prostrate beneath her feet. Associated with violence, Kali is the goddess of death and of doomsday.

Kal has a second meaning, ‘time’, and the blackness of Kali’s figure symbolises not only eternal darkness but the promise of new creation. Her naked appearance represents freedom from constraint, and the head and the sword she wields symbolise the severance of the ego, enabling the soul to escape the physical world and achieve moksha. One hand is held in a gesture of blessing. Her tongue sticks out in embarrassment, not blood-lust, for she failed to recognise the body of Shiva beneath her feet – he is lying in her path to stop her destructive rampage – and she has realised her mistake.

In spite of her seemingly terrible form, and also because of it, she is regarded by her devotees as a great protector – Kali Ma – the Mother of the whole Universe. She is the embodiment of feminine energy, creativity and fertility, for without her pulsating energy, existence itself would lie inert.
Suzanne McNeill is a writer and editor based in the United Kingdom.

The Order of Chaos