A Lament Of Temporal Realities

A review of the online exhibition hosted by Shrine Empire Gallery, featuring the works of artists Katyayini Gargi and Divya Singh that is on view at shrine empire gallery.com until October 3, 2020.

Filled with disconcerting hints on today’s reality, woven in with homogenous sensibilities, the works of Katyayini and Divya enthralls with the elastic tension of the contrary, suggestingan insidious montage of political rhetoric, socio-metaphysical commentary and teasing reticence. 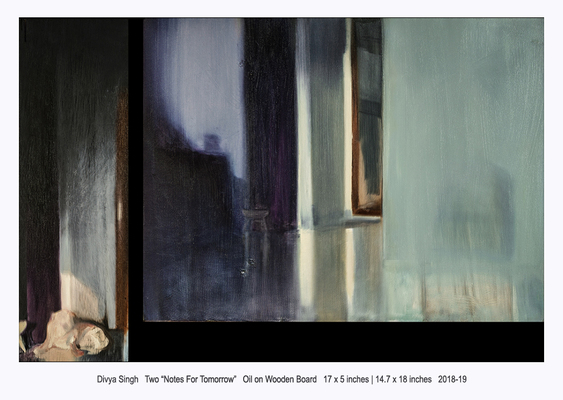 Katyayini draws on the cultural context giving expression to tense trepidation as it threatens all that is comfortingly stable and familiar and insinuates allegorically to cognitive states of ephemeralityand the psycho-social complex of identity. Her work Con(Temporary Living) deploys key propositions with hyperreal colours to imply how inherent stability can sometimes preclude a static quality, while Daawat (table for 9) symbolises the frailty of our existence and alludes to cryptic forcesin the cosmos that nurture a sense of volatility.‘When the focus becomes forcing a foundation, things go askew’, she declares as notably both the works explore the feeling of yearning and lost trails of discourse involving attached anticipations surrounding comatose objects. TheCentre Does Not Hold (patterns emerge) blends diverse circulation of socio-political ideas as the frozen silhouetted imagery of the video still unfreezes to imbricate art and life as it extrapolates from the dubious nature of immutability exploring the evane scence of plural anchorages of belonging. 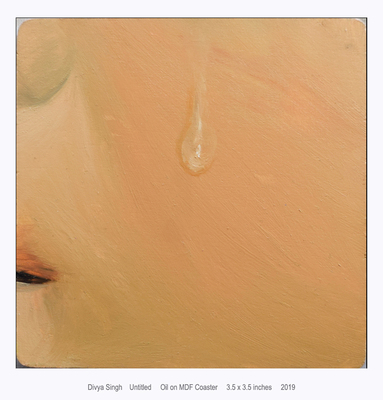 Rooted in the tangible and often overlooked reality of female oppression, Katyayini provides a panoptic view in her work Carried A House which sets into trajectory a smirking, punchy institutional critique that cocks a snook at patriarchy and gender roles with momentous shifts, nudged by emancipatory undertones.

Katyayini Gargi / Carried A House / Gouache, Graphite, Aluminium Foil and Graphite on paper / 10x14.7 Inches each (Series of 6) / 2018  All Images are Courtesy of the Artists and Shrine Empire Gallery, New Delhi.

Divya’s works guilefully posits a territorial point of view and assemblages the ideas of cognizance, actuality, confinement, time and death under the hefty umbrella of temporalities, with the tension in the works shuttling between things put into words and things that slip beneath the radar of language. Employing a robust, Kafkaesque idiom of an open-ended space, she delineates in her Untitled works and in Someone Else’s Memory, a carved up juxtaposed imagery of epiphany and illumination, mortality and ostracism, and gives the viewers an occasion to reflect upon the paradoxes. Projecting a motley of opaque and unfathomed sense of quietus and distilled with objects of remembrance, Divya explores the notion of ‘Death being really real and things not really dying’. Jumbling both concrete reality references and junctures where the real goes abstract, and vice versa, her unique work Film Stills/Sequence 01artfully captivates a poetic churning, acting as a latitude across all her works. 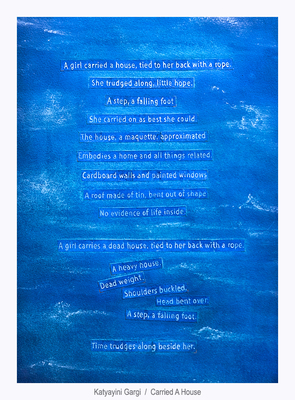 Katyayini Gargi / Carried A House  All Images are Courtesy of the Artists and Shrine Empire Gallery, New Delhi.

With the troubled and fractured reality, inter mixing with visual scraps from the cacophonous trivia all around, and the obscure assimilated ploy of substratum, the exhibition incubates a mystique, precisely to avoid being explained away.

Katyayini Gargi *The Centre Does Not Hold (patterns emerge)* 4 channel video animation with sound (format modified for online viewing) 2020 All Images are Courtesy of the Artists and Shrine Empire Gallery, New Delhi.

Priyanka Bhattacharjee is an up and coming writer based in Kolkata.