A Husain-Shaped Mirage In The Desert

THERE IS NO OTHER INDIAN ARTIST whose work has branched out in so many different directions as has M.F Husain’s. If artists were trees, Husain would be the Banyan that grows and grows till it becomes its own forest, its own eco-system with roots and trunks indistinguishable from each other. He has been a painter, sculptor, installationist, poet, writer, filmmaker and an all-round agent provocateur from the moment India got her independence to her coming into her own as the world’s third largest economy all in his lifetime. Ninety-seven years to be exact in which he walked—feeling through his bare-feet—the rapid changes of a modern world. 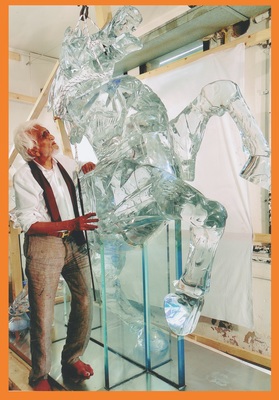 M.F. Husain photographed in 2009 with one of his Murano-glass horses

A decade after his passing in 2011 a new work of his was unveiled in Doha, Qatar, just a few months before the Covid pandemic took hold of the world in December 2019. His vision was realized by Sheikha Moza bint Nasser, the former queen consort of the kingdom whose citizen he had become in his last years. Called ‘Seeroo Fi Al Ardh’ a Quranic verse that roughly translates as ‘walk through the earth in order to learn more’, the work had begun taking shape when Husain was still alive. He had wanted to create his favourite horses in a medium that he had not attempted before. Perhaps like all great artists he wanted to test his virtuosity by making the impossible possible. Which is how his glass horses came to be. Think about it, the impossible idea of life-size horses made of the finest Murano glass galloping on a moving stage. That was the genius of Husain. His son Mustafa aptly describes the feeling when he saw his father’s final work for the first time. “I was shocked, frozen, really overwhelmed by what I saw there,” he remembers.

Each of these glass horses weigh nearly 2 tonnes each

M.F. Husain had always been known to push the boundaries, taking the viewer out of his knowledge closet to places he never knew existed. Like his film ‘Gaja Gamini’ that cast box-office money-spinners of the time like Madhuri Dixit and Shah Rukh Khan and placed them in a bubble of experimental cinema the likes of which India hadn’t seen before, or at least not seen Bollywood royalty act in. The film didn’t quite make an impact on mainstream viewers but it had some of the finest lines—also written by Husain—and some amazing frames. ‘Gaja Gamini’ was by no means Husain’s first film. He had already wowed critics with his ‘Through The Eyes of A Painter’ a short film made by Films Division in which he captured the way images and moments distilled in his mind finally taking shape as paintings. By the time ‘Gaja Gamini’ and later ‘Meenaxi—A Tale of Three Cities’ came out his Golden Bear from the prestigious Berlin International Film Festival and the equally valued Indian National Film Award were already nearly four decades old.

‘Seeroo Fi Al Ardh’ takes the Husain phenomenon further into the 21st century with its multimedia spectacle that uses synchronized lights and music, a hydraulic stage and some vintage cars to show the evolution of man’s travels. There is also a giant installation of his horses painting that has been transmuted into a thousand of pieces of shimmering ceramic, like a Husain-shaped mirage in the desert. “He had left very specific instructions and drawings for the entire work. But the most complicated of them all was the stage that took a whole team of engineers, architects and specialists to put together. So when people ask me why did it take so long, I tell them you have to come and see it for yourself,” laughs Layla Ibrahim Bacha, Senior Art Specialist for Qatar Foundation, who oversaw the nine years that it took for the work to come together.

Dhiraj Singh is a well-known journalist, writer, TV personality and artist who has shown his abstract paintings and X-Ray works in India and abroad. He is also a co-founder of Hunar TV, a web channel for the arts. More about him can be found at www.dhirajsingh.co.in

Read More: The (in)Visible And The (un)Revealed: Inside The Secret Worlds Of Kartick Chandra Pyne