Brinda Somaya’s architectural vocabulary is tinged with poetry. The founder and principal architect of Mumbai-based Somaya and Kalappa Consultants (SNK) was in Chennai recently as part of a series organised by Goethe-Institut in collaboration with Saveetha College of Architecture and Design, and curated by the Roots Fellowship programme. I was intrigued by Somaya’s use of metaphors in building design, her emphasis on art, and the way her work seems to reflect a connectedness with the earth. ‘One of the most important things is always the land itself – whether it’s in the mountains or the hills, on flat land or by a river,’ said Somaya, speaking about some of the things she considers at the start of a project. ‘One has to talk to the land, the land has to talk to you. You also have to tread the land lightly – you don’t want to destroy and change the feeling of the land.’ Over a phone conversation a few weeks later, I dug a little deeper, pardon the pun.

Excerpts from the conversation

I was fascinated by your use of the Narmada River as a metaphor for the TCS Campus project in Indore. What was the thought process behind this?
It was a very flat, and in some ways, an uninspiring piece of land. But the rivers run quite close and the Narmada epitomises Madhya Pradesh in many ways.
For a campus, one should have the sense of indoor–outdoor spaces, courtyards, greenery. These young kids, their average age is between 24 and 28, and they’re looking at the computer from morning to night – we were very clear that we didn’t want to build a box for them. So it became very important for us on this long, narrow plot to have the idea of an internal river plaza that flows through. Firstly, we had to make sure that cars don’t come in, that it’s purely pedestrian. Once you come into the group of buildings and the river plaza, and then the group of buildings across the other side, there’s absolutely no vehicular movement anywhere. The river actually flows seamlessly between the buildings.

How did you interpret the river’s courses in the design of the buildings and its interiors?
The Narmada begins in Amarkantak, the mountains on the eastern side of Madhya Pradesh. So we had a water body in the building’s ‘upper course’ to show where it began. And then, the river flows down to the marble rocks of Jabalpur, which are very jagged. So there, the buildings are much closer to each other. We wanted to give the sense of a gorge, so we translated that into the angles of the buildings as well. So there’s a sense of changing the space that’s between the buildings. And then, the river comes to the Gulf of Khambhat on the Western coast of India. So we spread the two buildings, which are on either side of the river plaza, and terminated this with an amphitheatre.
We had a landscape designer on board and we worked very closely in terms of the language of the architecture continuing in the language of the landscape – whether it was the lines on the landscape continuing on the bottom of the water bodies, or becoming the linear benches. They were all connecting lines.
We also chose certain historic areas where the Narmada flows through, like prehistoric caves and temples, and we used those colours and thoughts in the interior spaces. 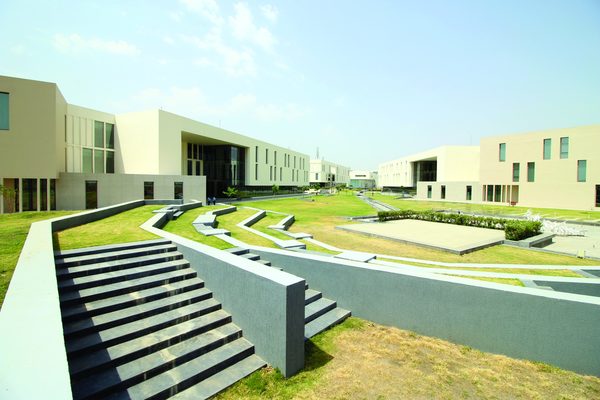 You’d mentioned that you always set aside a budget for artwork. How does a piece of art change one’s experience of a space?
It depends on what it is and what size it is. Something very small can be fascinating in a smaller space, but if you have a large space and you have a fantastic… it could be a tapestry, a hanging, a painting, a sculpture… naturally it will enhance the space. I think everybody looks at art in different ways and takes away from the painting or the sculpture a different story. Each person would react to that combination of art and architecture in their own way.

What is your process of work with artists and craftsmen?
We don’t finish a building and then go and buy some paintings and stick it… we don’t do that. We start working with craftsmen and artists right from the beginning of the project. That’s very important for me. The craftsmen of India…we can’t get greater craftsmen anywhere in the world. But what we’ve tried to do in our studio is to change the scale at which they work. If each and every architect decides to use craftsmen in their buildings in different ways, and work with the craftsmen in the design process itself, we will ensure that our crafts never die.

What are the challenges unique to architects in India?
We have a lot of labour who are creative, but to achieve the quality of finish in an entire building is quite different from achieving the quality of finish in a small piece of art. We never finish things properly because we don’t detail things properly. In our studio, we spend a lot of time and effort in details, and we try and ensure that those details are built and fulfilled to that standard. That’s what gives completeness to a building, a project or a pavement.