Nepalese artist Youdhisthir’s artworks are a study in the vicissitudes of repetition and precision asking us to dwell not so much in the beginning or the end, but in that inchoate middle where the process takes over. An exclusive interview with the artist

Surrounded by used books collected from thrift stores across cities, Youdhisthir (Youdhi) sits under two table lamps with a surgical knife and an open book. With the exactitude of a surgeon, and the patience of a monk, he starts to cut out individual text from the page. Everything around him slowly drowns in this silent process and, eventually, he is in a meditative zone with only the sound of his knife piercing through the page, the tempo and rhythm dictated by his physicality and the arrangement of the alphabets on the page. It’s laborious, repetitive, mundane, but it’s also like a ritual, a performance.

Sometimes Youdhi white-washes text of a selected page, leaving out all the ‘O’s in it, and connects them all following a set of rules he invents for that particular work. At other times, he leaves out all the vertical lines of the alphabets. His processes explore material specificity of language and exploit text at a molecular level where the smallest change can cause enough poetic friction to start a new life that transcends its origin. 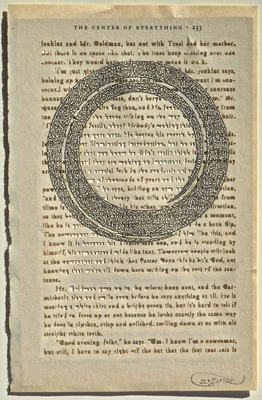 The Center of Everything, Reclaimed Text Cutout Collage,

Every text he cuts out is meticulously glued back into simple geometric shapes, gently lifting them up from their original place with the tip of his knife. This breathless repetition of cutting and gluing one letter at a time, including the punctuation marks, transforms what was once legible and sensible language with stories and information and messages into a dense block of marks and texture, familiar… but frustratingly illegible and meaningless, questioning the domain of institutionalised language and meaning. It leaves behind a visual babble or a language after language, a cacophony. ‘Being born in Nepal, where art and artists are still marginalised and struggling, one has to sacrifice a lot to live the vision of an artist. Every little event in my life has prepared me to do what I do now. Everything came into place for me after I got out of grad school, when I was without my studio space and printmaking facilities, and was forced to work from my two-bedroom apartment. My focus shifted from large-scale installation printmaking practice to smaller works that carried the weight of the concept of my repetitive and laborious processes. My experience of reading Beckett’s Waiting for Godot, and Camus’ Myth of Sisyphus, both during my undergraduate years, directed me into working with recurring and rhythmic processes with no definite end,’ he says.

An intuitive communicative energy that strips language of its prescribed meaning and charges it with other values, providing autonomy back to the ‘sign’, to the body of writing, in order to give voice to the emptiness – the unsaid – Youdhi’s art invites the viewer to investigate the ineffable. Like the quiet intensity of a monk absorbed in devotional silence, the beauty lies not in what it says (or does not say) but in the labour and patience of the process by which it was brought into being. It becomes a journey into the unknown, even for the beholder of the work.

Read More: Bulls Are The Trending Image This Week On Mojarto