Enter at Your Own Risk was described as ‘a ‘seditious’ play in a few scenes showing sanity and insanity performed by actors as inmates of National Paagalkhaana – By Order of Toba Tek Singh’. It was based on Sa’adat Hasan Manto’s four stories on the Partition, but in its theatrical rendering it displayed ominous similarities to contemporary times. Edited excerpts from the story.

At the time of the Partition, when India was being divided into two new nations based on religious identities of the people, a mass hysteria and an unimaginable violence trapped this piece of land where millions of people lost their lives, homes and existence. Sa’adat Hasan Manto’s partition stories brazenly brought out this madness, which was fuelled by communal hatred.

Reading Manto, especially through the four stories that we chose for Enter at Your Own Risk – Toba Tek Singh, Shareefan, Thanda Gosht and Khol do – we felt that his ideas created a resonance; the sharpness of his words, written at the time of the Partition, continue to evoke disturbance in our minds. His stories gave us a new lens to look at and examine the madness that persists in the ordinary and everyday around us, to which we have become so normalised, that it renders us to question our own notions of ‘normal’ and ‘sane’. 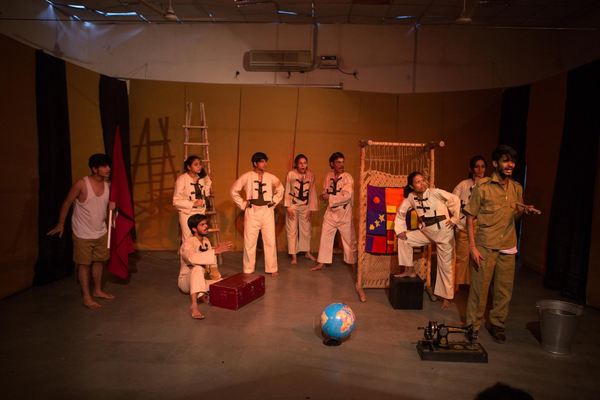 And, therefore, Enter at Your Own Risk is set in a mental asylum, where Bashir, Manto and the other characters from these four stories are all inmates; their back stories and interconnections were purposefully weaved together in the fabric of the play, to make visible the dark realities of ongoing violence committed in the name of nationalism.

In Toba Tek Singh, Manto portrays the absurdity of Partition, national boundaries and the sacrosanct status given to them, by locating the story in a mental asylum where the inmates are being sent to India or Pakistan according to their religious identity. Through the climax sequence of the death of Bishan Singh, the central character, in no man’s land, he chillingly deconstructs the notions of sanity and insanity. 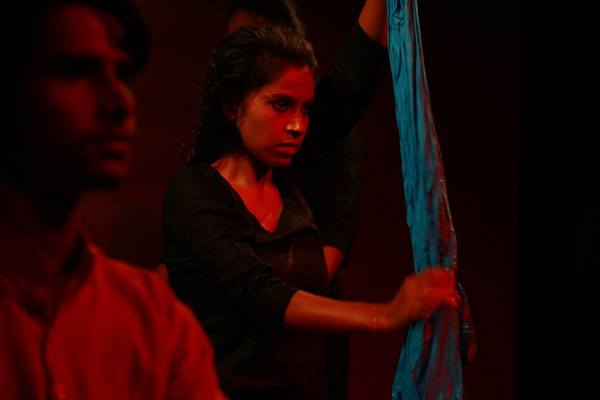 We found striking thematic similarities in Bashir’s story. Bashir is a real-life person from Kashmir who lost his mental stability after being brutally tortured by a Major from the Indian Army. His mental instability, because of which he starts to identify himself as his oppressor, his identity crisis and the question of Kashmir (still a disputed (no-man’s?) land between India and Pakistan) were used as metaphors for Toba Tek Singh in the play.

Like Bishan Singh, Bashir speaks gibberish representing the collapse of the structure of language in situations like his; he does absurd things like washing his hands again and again, and is always irritated and angry. We chose dark humour to gradually unfold the story of Bashir’s torture. In certain comicmime sequences, Bashir, who thinks he is a tailor who stitches national flags and is very possessive and reverential towards the flag, fights with another character Khuda for the protection of the flag. He even does a few stunts of yoga while paying his respects to the flag. The purpose of the flag was to comment on the current sociopolitical paranoia that surrounds us, as it has a symbolic image of the ‘holy’ cow on one side and a surveillance camera on the other. 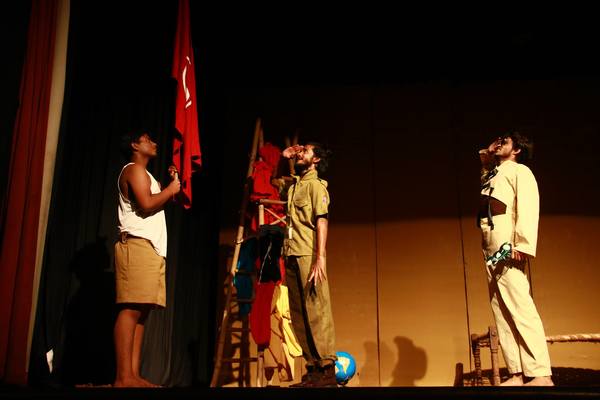 Rashi Mishra, is a postgraduate in Conflict and Peace Studies from JMI and Sukriti Khurana, is a theatre practitioner based in Delhi, with double masters in English Literature and Performance Studies.